Resistance needs no permit: COP 21 opens with climate marches all over the world and the arrest of around 200 in Paris

The 21st Conference of Parties of the United Nations Framework Convention on Climate Change (UNFCCC) opened today in Paris, where the world’s leaders are expected to come to an agreement on actions to solve the climate crisis.

From La Paz (Bolivia) to Manila (Philippines) and to Fiji (Pacific Islands), hundreds of thousands of people have participated in various People’s Climate Marches all over the world in the last two days to step up the pressure on the world leaders to agree on a meaningful outcome for the Paris Climate Summit.

However, the COP 21 also takes place amidst a backdrop of a state of emergency in Paris, following the terror attacks of November 13 that left more than a hundred dead and many more injured.

Protest is currently banned in Paris. This means any outdoor gathering of more than two has been strictly prohibited, and anyone taking part in an illegal demonstration could face penalties of USD 3,972 or up to two months in prison. Clearly, this was meant to quell dissent, because while the French government has continued to allow Christmas markets and trade fairs to be held, it has put a number of climate campaigners under house arrest.  As such, yearlong efforts by French and international civil society and social movements to mobilize 100,000 for the Paris Climate March had to be cancelled.
Today, in the French capital, around 20,000 pairs of shoes were laid out in the Place de la Republique to symbolize marchers that were not allowed to exercise their right to peaceful assembly.  Afterwards, an estimated 10,000 people formed a human chain spanning several kilometers along the sidewalk, with banners that called for ‘system change, not climate change’, ‘no to false solutions’, and chanting ‘l’etat d’urgence, c’est le climat (‘the state of emergency is the climate).
But things got ugly in the afternoon, when French riot police came down full force on hundreds of people gathered at the Republique. The anti-riot police fired tear gas canisters at the people, and quickly the air was filled with smoke that stung the eyes and skin. Some sought refuge at nearby cafes and restaurants, while the others tried to assert their right to assemble and express themselves. The police swooped down on everyone out in the street at the Republique, and filled the buses with around 200 people they arrested.
Liberte, Egalite, Fraternite (Liberty, equality, fraternity) – the ideals that propelled the French Revolution – are these for all women and men, or for the corporations and elites at the Le Bourget, site of the COP 21?  (### Tetet Nera-Lauron) 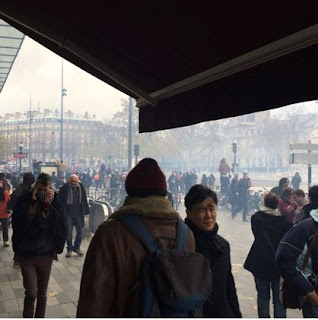 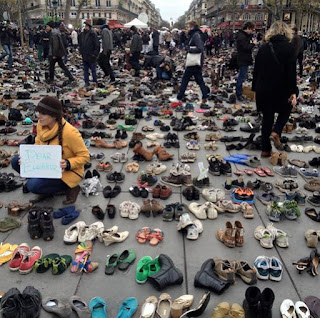