The human chain for climate


The CIDSE delegation today took part in the human chain for climate organised in Paris. Here are some of our thoughts and our pictures of the day are uploaded here.

Unfortunately, we could not march today in the big avenues of Paris as I was waiting for since months. I was quite sad this morning when I woke up but, as always, people’s power has creativity and courage! Together with colleagues and friends, I took part at the big human chain and I feel encouraged now travelling back home! I feel empowered by colleagues shouting close to me “what do you want? Climate justice!”, by groups of French volunteers gathering in small groups before the mobilisation to exchange on how important it is being in Parisian streets today; I feel empowered by grandparents stating they are present because they feel the responsibility of the planet in danger they are leaving to their grand children; I feel empowered looking at the colourful banners plenty of slogans showing that solutions for a more sustainable world are possible and already existing! Now it’s time to continue keeping this voice strong and heard…because each of us can Change for the planet – Care for the people! - Chiara Martinelli, CIDSE

French people like to demonstrate and protest in the street. When they cannot express their fear, their joy, their discontent to their co-citizens, to their decision makers, to the world, they feel like a part of themselves is constraint. It creates frustration and alternatives flourish, allowing everyone to express him/herself. Well… this is what happened today in Paris. French people never feel defeated. We could not walk but we held hands. We could not invade the streets so we invested sidewalks. We could not hold banners but we had badges, stickers and signs to hold high our values. We were able to show our leaders that climate change counts and that there is a moral imperative to take our call into account. We were able to show the world that peace cannot rime without climate justice. –Inès Bentolila, CIDSE

I enjoyed very much today forming part of the human chain with the colleagues and friends from the CIDSE family and with many other committed citizens. After having worked hard together looking at these important appointments in Paris, being here and knowing that everything is starting feels surreal and exciting. I was impressed by the variety of people present, and very motivated by the willingness of people who chose to show up in the streets of Paris despite the difficult premises. It’s good to see that there are many like-minded people, all committed to raise their voices for a good climate deal! We also thought a lot about people marching in other countries, seeing the pictures of the big marches like the one in London was also heartwarming!  - Valentina Pavarotti, CIDSE 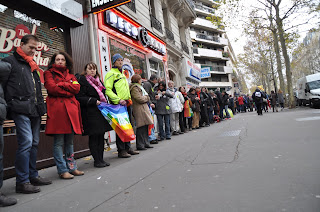 A stretch of the human chain in Paris