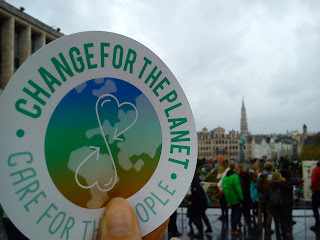 Brussels, November 30, 2015 – About 4000 people mobilized yesterday during the human chain for Climate Justice in Brussels. Despite the many attempts to halt the marches due to the given state of alarm after the Paris Attacks, many citizens took the streets and sidewalks of the city center – from the Palais de Justice to the Bourse – holding hands in solidarity for climate justice and peace. Change4Planet was present among the festive crowd!

The determination of the Belgian social movements to find alternatives and to continue ahead with the different actions can be read first as an act of defiance to the environment of fear that lurks in the country following the strict security measures imposed by the Belgian government. In stark contrast, a joyful and peaceful spirit reigned among the many participants of the human chain, sending a powerful message ahead of COP21: The time to act is here and now! 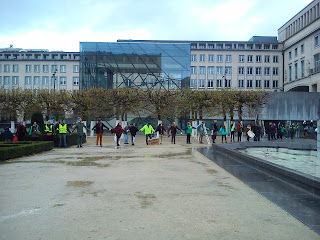 
In a united cry, the cheering crowd called upon world leaders, but also and particulary on the Belgian government’s faltering commitment due to internal divisions over “burden sharing” of climate measures between the different regions. These have hindered a united national plan of action for COP21 and leave Belgium at a weak position during the climate negotiations.

Finally, taking a moment to observe the thousands of people - women, men, young and old, from different places and walks of life - who took a moment during their sunday afternoon to make a stand for climate justice, makes us realize that it is in unity that we'll find great strenght to overcome the challenges that lie ahead.