Thoughts from the Global Climate March in Rio 2015

Rio de Janeiro, 30 November 2015 - Joined by a fanfare, about 400 people participated in the Global Climate March in Rio de Janeiro, Brazil this past weekend. Different political trends from Rio's environmental movement were present.

In Rio, as in all the corners of the country, the tragedy of Mariana was highlighted in the banners and the performances that animated the march. The Samarco mine burst caused important human and environmental damages, as it swept away the town of Bento Rodrigues, and sent a significant amount of toxic iron-ore downstream and into the Atlantic ocean, contaminating the water supply of hundreds of thousands of residents. It has been considered the major environmental disaster of the mining sector in the history of Brazil. 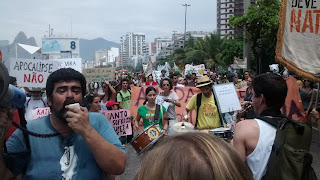 As in other parts of the world, the marches aim to pressure world leaders attending the Climate Conference (COP21) that starts today in Paris, to adopt effective measures to halt the warming of the planet. It will be difficult, however, for countries to reach an agreement on the reduction of green house gas emissions and on the development of a low-carbon economy. 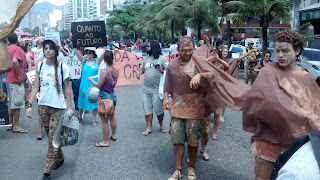 In the streets of Rio, many remember the environmental tragedy of Mariana

The joint declaration from the social movements and collectives that participated in the March in Rio highlighted several socio-environmental asks related to climate change, among them, the end of fossil fuel subsidies, the fight against deforestation, the promotion of microgeneration of solar and wind energy, and the preservation of water resources. 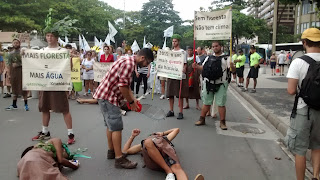