A visit to the Centre Centquatre (and beyond)

While ministers are negotiating in Le Bourget, I decide to pay a visit to the Cultural Centre Centquatre, this week the headquarters of   'Coalition Climat 21' in Paris.

The atmosphere inside is relaxed and busy at the same time. There is an exhibition, there are workshops going on, schools have been invited to pay a visit, and activists meet here to exchange and prepare concerted action. 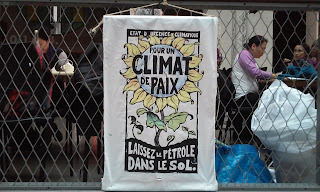 One of the issues in the exhibition is food production and urban agriculture. An ingenious looking four wheel machine attracts attention. It is designed to be used in horticulture, following the 'lowtech' principles that are put into practice by enthusiast inventors nowadays.

By coincidence, as I leave and walk along the Rue de Flandre, I see an example of this urban gardening. A sign tells me that this garden is maintained by people living in the quarter. They are part of a larger network of  'jardins partagés' (shared gardens). They can be found at http://www.jardinons-ensemble.org/.

Later on I walk to the Pantheon, near to the Sorbonne. There, a Danish-Islandic artist named Olafur Eliasson put 12 big blocks of glacier ice in a circle, like a giant clock. He took them out of the sea, where they were floating after being broken from the huge amount of ice covering Greenland. During COP21 they are slowly melting away, as a visible warning to the world that urgent action against climate change must be taken. http://icewatchparis.com/ 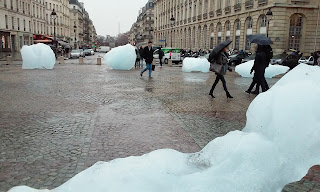 The same message came today from activists in the conference venue itself. Near the mini Eiffel Tower that is raised there, they asked negotiators again to limit global warming to 1.5 degrees. With the actual INDCs,'  this goal would not at all be met. 3 degrees would be more likely, and that is a doom scenario.