Telling my mum why I am in Paris for the COP21

7 December 2015 - A few days ago my mum called me. It was not clear to her the reason why I should expect to go to Paris at these times and to the COP21, specifically. Even more, she was wondering what Caritas had to do with it, since Caritas is a CSO working on poverty, social issues, migration, humanitarian crises. War, maybe. For sure not an environmental NGO.


Apart from confirming she is not following our website that much, she convinced me to insist on talking and explaining.

I bet this is a proper moment, after the first full day in Paris, at the beginning of the second and last week of negotiations.

Everything seems to be more or less decided now, still, it is worthy to remind what it pushed us to be there.

Climate change has everything to do with poverty, migration, social justice, food security, human rights. We stated it several time and in several places, both in think tanks, policy arenas and globally in every corner of the world. The job which has been done so far was mostly behind the scenes but it has been continuous, tough and unstoppable, thanks to the great committment led by people of good will and professionals as we do have in the Caritas and CIDSE families.

Still, it is never enough. Although without getting into technicalities and acronyms - of which the COP is more than full -, we might list our priorities as follows. In Paris agreement, we would like to see decent and ambitious long term goals, a clear and timely dynamic review of the agreement, a climate finance granting low development countries and communities the right to develop and not the duty to pay for what they are not responsible for. Even more, the agreement has to clearly respect people and universal rights, where food security and land use are granted. Last but not least, we are convinced about the need of decent adaptation measures, avoiding false solutions.

Basically, everything might stay in a three-line space. But it does not.

It might not even find space in the whole text, if someone had to be realistic with caution.

Nothing is agreed until everything is agreed, no opinion will be left behind, in terms of Country. I imagine at this point my mum would ask me what is the position of different Countries, since it is already quite late at night. There, she would get this picture: 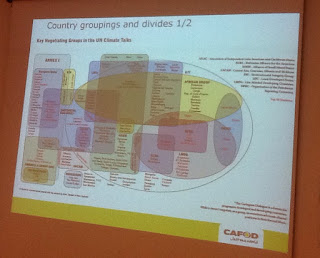 Which would make her abandoning the field, tired and hopeless.

Still I dare to add a few more points to have things a bit clearer, for those who are patient.

In Caritas Europa we are very much interested about the position of the European Union and European Countries within and outside EU.

In terms of commitments, Commissioner Cañete said today Europe confirms its willingness to increase proper funding but a lot will be left to individual commitments by Member States.

Globally, “Countries that were rich will become poor, countries that were poor will become the richest in the world, because they are developing, which is a good thing.”, Commissioner Cañete said. This is also for some developing countries, assurance that developed countries will shoulder the burden of tackling climate change is a prerequisite, according to the principle of "common but differentiated responsibilities".

The Prime Minister of Luxembourg, holding the last weeks of EU presidency, apologized for not having been able to put human rights properly in EU position. Rumors confirm a couple of Member States did not agree on that, sadly.

Of course the tough game is playing somewhere else. Countries like Saudi Arabia are more than closed to any solution and the US are facing the great obstacle of the Congress, which is not accepting any binding agreement at all.

It might be in less than 72 hours time the final agreeement will be delivered for proofreading and translation, the French presidency said.

At this stage negotiations are going on in four thematic working groups, led by four Countries of the North (the UK, Norway, Singapore and Germany) and four Countries of the South (St Lucia, Gabon, Brazil and Gambia). These are having the big responsibility of bridging between the mess of Individual position to a tidy and effective document.

All vulnerable people from every corner of the world are relying on them. 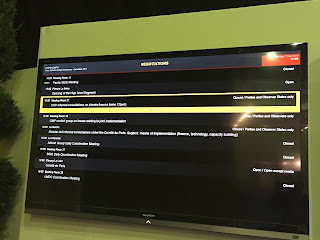