A walk to remember: Development and Peace members march in Ottawa and across Canada 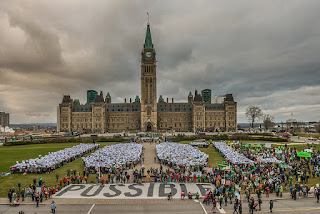 By Development and Peace

Montreal, December 1, 2015 - As world leaders descended upon Paris for the COP21 climate negotiations on November 29th, 785,000 people marched worldwide to tell them that it is time to take real action on climate change. Here in Canada, 25,000 people gathered in Ottawa, while other marches took place from Antigonish, Nova Scotia to Vancouver, B.C.

Development and Peace was part of the steering committee that helped organize the 100% Possible march in Ottawa. Members from Montreal, Quebec, Trois-Rivières, Kingston, Peterborough and Toronto boarded buses to join in this historic moment. And let’s not forget local members from Ottawa and Gatineau who came out in large numbers! 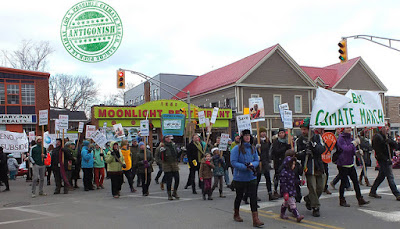 The event kicked off with a series of speeches by leaders who represented the generation who are in the struggle to halt climate change to preserve the planet for the next generations to come. Archbishop Paul-André Durocher of Gatineau spoke on behalf of Development and Peace and helped energize the crowd with the Pope’s inspiring message to the world to care for our common home. He re-iterated the words of the Pope from his recent speech in Nairobi, Kenya:

“I express my hope that COP21 will achieve a global and ‘transformational’ agreement based on the principles of solidarity, justice, equality and participation; an agreement which targets three complex and interdependent goals: lessening the impact of climate change, fighting poverty and ensuring respect for human dignity.” 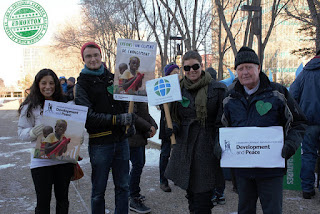 Development and Peace banners and tuques (made in Canada!) were highly visible throughout the march, which ended on Parliament Hill. Participants formed a human 100% on the lawn to show that it is 100% possible to transition to a fossil free economy by 2050. The march ended with speeches from youth who shared with the crowd their hopes for the future: a healthy planet that they can continue to care for! 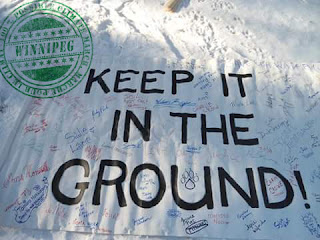 Watch the video of the march here.