Climate negotiations: where we stand after one week

The CIDSE delegation at COP 21 has been following the development of the climate negotiations from inside Le Bourget conference centre, advocating for a fair and just deal, convinced that addressing climate change is essential to tackle poverty and inequality.

Today we broke the routine, and some of us took the metro in the opposite direction to join the Citizens’ summit organized by the Coalition Climate 21 in Montreuil, where several actions, debates and initiatives organized by the civil society are underway. This morning our Secretary General Bernd Nilles spoke at the event “Just Transition, a dialogue” organized by ITUC, International Trade Union Confederation. Another busy day in Paris! 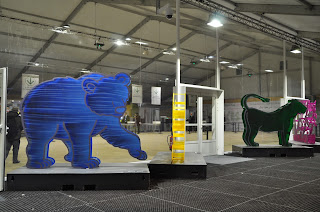 One of the installations inside Le Bourget conference centre


As we reported at the beginning of the week, the conference started with some encouraging words from leaders. We were positively surprised by statements like the one by US President Obama who said: “We know the truth that many nations have contributed little to climate change but will be the first to feel its most destructive effects.” This made us hope that countries are ready to take on the responsibilities of their climate change impacts. Many leaders also quoted Laudato Si, endorsing a vision of climate justice which puts the vulnerable at the centre.

Yesterday was marked by the delivery of the draft Paris Outcome text by the ADP to ministers, which has been considered as a landmark achievement, reached after 4 years of intense negotiations. (Brief aside for people who are not familiar with COP language: ADP stands for Ad Hoc Working Group on the Durban Platform for Enhanced Action. It is a body that was established in December 2011 with the mandate to develop a text to be adopted at COP 21 and to be implemented from 2020.). The French presidency now assumes the leadership of the 21st Conference of the Parties which just got underway. At the ADP closing plenary we had a sense that parties are moving forward, but we were struck, as many other people in the room, by the intervention of a Malaysian representative, who reminded to the audience that we shouldn’t forget the principles of CBDRRC (common but differentiated responsibilities and respected capabilities) and equity. He pointed out that comparing 1992 levels with the ones of today, inequality has increased. He reminded us that the tragic issue of poverty still persists, and that addressing climate change also means addressing poverty and inequality.

Regarding the state of the text, after these few days of negotiations in Paris only small changes were made, as well as little advancement in some of the key issues CIDSE is working on: human rights is currently in the preamble and the operational part of the draft outcome text which need to be secured; as per food security the language must be kept in the operative part of the Paris Outcome (mitigation, finance) and in the preamble as an overarching principle whereas references to “food production and food distribution” must be removed.

Climate finance will likely unlock (or not!) the design of the Paris Outcome. Though what is keeping things from moving forward of course is the issue of differentiation (which isn't just to do with financing but is a cross-cutting issue). Developed countries are trying hard to broaden the commitment of financing for developing countries (a commitment firmly embedded in the Convention, and then quantified to rich countries mobilising and providing a 100bn by 2020 in Copenhagen) to include other countries that they think have the capacity to pay. While developing countries having not seen much of the tooted 100bn being delivered think any obligations for providing finance to developing countries to not only cope and adapt to climate change but also transition to sustainable consumption and production of energy lies soley with the developed countries (those with the historical responsibility and most capacity to pay). The worst offenders of course are the usual suspects the Umbrella Group (US, Japan, Canada, Australia and Norway) and the EU.

Its is THE most contentious issue, as it was also explained by Brandon Wo from Action Aid in a press conference yesterday. He pointed out that developed countries are still not coming forward with enough money and with a plan to deliver it in the future. But we should remember that climate finance is not a concession, it is the key driver of a string outcome, without which there is no insurance for developing countries to make a commitment!

It’s encouraging that the Long-term Goal of 1.5 degree Celsius is now being backed not just by developing countries, especially the Climate Vulnerable Forum (20 of the most vulnerable countries), AOSIS (Alliance of Small Island States) and LDCs (Least Developed Countries), but also by Canada, Australia and some EU countries like France and Germany, whereas the European Union’s common position remains on 2 degrees. Limiting global warming to 1.5 degree Celsius is considered as the limit to avoid looming catastrophes.

We were happy to know that the issue of loss and damage will be included in the text. This was one of the most crunchy issues, as the USA been opposed to any references to it, let alone the C-word (compensation), and we consider this therefore a good development. (With loss and damage we refer to the adverse effects of climate change that occur despite global mitigation and local adaptation efforts). Another sticky issue is the language used in the text on decarbonization which in the current draft outcome text is weakened and instead language “zero global GHG emissions” seems the best option although progress is still needed to include the preferred timeline “by 2050” . There is even agreement on revising plans submitted by countries on reducing emissions by 2020.

A real fight is being put up by countries like Norway, Argentina the US and Saudi Arabia on human rights and food security. The text seems to be getting worse and worse by the minute and while the NGOs are trying to keep the pressure up, because all meetings or most are closed to observers it's difficult to fight back- we are however trying our best in the position we are in.