The alternative Tour in Paris – a story of hope

As a Parisian who grew up in the South of Paris, I was glad to discover the northern part of the city and its cosmopolite 19th arrondissement under a “sustainable alternative” aspect. Indeed, this part of Paris is better known for its multiculturalism and for its people living often in precarious conditions rather than for its climate action. 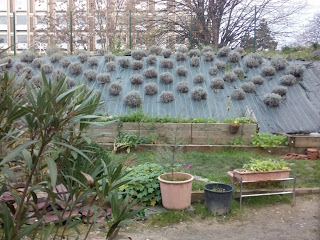 I was very excited about this Tour: while looking for an outdoor and concrete activity for our Programme in Paris, I was in touch with a friend committed in social and solidarity organizations in Paris. She advised me to contact L’Alternative Urbaine. This association was not only offering a guided tour on sustainable alternatives in an uncommon area of Paris, but its main goal was to encourage social insertion. Indeed, L’Alternative Urbaine is a social and professional organization employing people in precarious situations and using innovative forms of inclusion combining culture and tourism. The mission is not to train people to become touristic guide, but to use urban walks as a way to give confidence to people away from employment. Sustainable lifestyles and solidarity appeared to me like the perfect combination, in line with what CIDSE and its members are promoting.

This is how Antonio, with the help of Amandine, guided us among initiatives designed by citizens, associations and local civil society to rethink our way of living and consuming: community gardens, Community Supported Agriculture (in French AMAP: Association pour le Maintien d’une agriculture paysanne), bicycle repair shop, FabLab (open fabrication laboratory) and many other solidarity initiatives.

The idea was therefore to showcase existing solutions in a construction and positive perspective! Indeed, the Alternative tour gave key elements to understand what a poor area of a big city such as Paris can do to include its citizens, to consider the environment, to respect our resources, to exchange and share at a local level.

At the end of our visit we had a powerful, unexpected and very spontaneous moment within my group. Right after having visited the community garden, a Muslim religious man stopped Sister Christina from the CAFOD delegation. He looked at her rosary and recalled that Muslims and Catholics were praying on the same type of prayer beads. By both touching at the rosary, he simply said he wanted to pray together for peace. A few weeks after the terrorist attacks in Paris, that was an extraordinary and deep moment of hope. While we had to walk away, the man was standing, giving us a wave goodbye. A goodbye of hope. 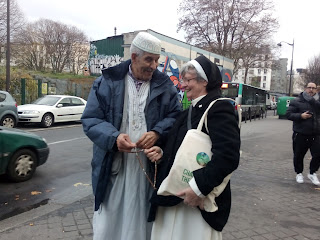