It was a grey and miserable day as I travelled from Glasgow to Edinburgh, and the forecast was for heavy rain. The big question was – would people turn up?  The answer was “yes”.  The day may have been grey but the people turned up in their thousands and turned the Meadows gathering point into a sea of colour and flags/banners.

There were all ages from grandparents to babies in prams, as well as a lot of dogs.  The only person I saw looking unhappy was one little girl who was crying because she had spotted another child dressed as a parrot and she wanted to be one too!  The weather turned out better than expected with no rain until we got to Princes Street Gardens, and even then it was heavy only for a short period. 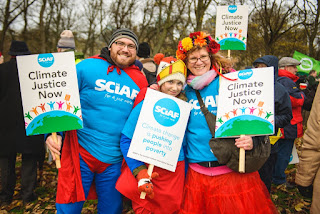 It was heart-warming to have so many people marching, stretching as far as the eye could see, led by Stockbridge pipe band from the Meadows up over the Mound and then down to Princes Street.  They were accompanied by improvised drums and rattles, whistles and chants, as the marchers sought to get their message across – we want our politicians (UK and Scottish) to act to save our planet.  We were sustained on our way by kind fellow-marchers handing out free bread from a cycle-powered mobile store! 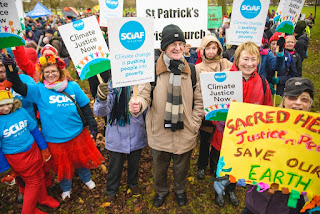 When the marchers reached the bandstand, they were greeted by the pipe band and then by Colonel Mustard and the Dijon 5, and Jo Mango before the speeches began.  The compere (comedian and writer) Hardeep Singh Kohli kept things moving with a dash of humour. He began the speeches with a request for a period of silence to remember Paris and all victims of terrorism, however we defined it.  Then there were inputs from representatives of all the main political parties.  I suspect, however, that most people were waiting to hear from the non-politicians.
12 year old Ruby got an ovation for her brief and to-the-point speech.  As Hardeep said, she showed more sense than most UK politicians.  The final two speakers could not have been more different in some ways, yet they had so much in common, and people stayed on in what was now pouring rain to hear them. 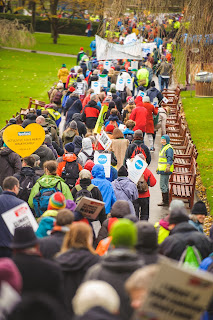 The first was Lisa Seally, a crofter from the Western Isles, who spoke with simple frankness about the experiences of her community over the last year: storms, lightning strikes and high winds in the winter which had often left them with no electricity and in some cases no roofs; then the cold wet spring with little improvement in summer which had meant that animals were kept indoors until mid-summer and new grass was not available for ewes and their lambs to eat. The lack of growth would mean that many animals could not be kept over the coming winter and would have to be slaughtered.  This in turn would cause a fall in prices and further financial strains on the fragile livelihoods of crofters.  But, she said, these problems don’t register in the media, just as similar problems across the world do not hit the headlines. 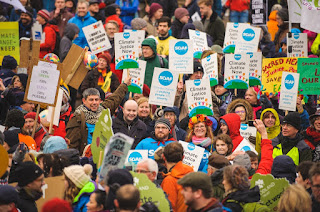 Lisa tried to end with a positive note by saying that we have the technology and the means to limit global climate change – if only our politicians would be prepared to take the necessary actions.
The second speaker was Voltaire Alferez, a climate campaigner from the Philippines.  His message was equally simply expressed.  The Philippines is experiencing two storms a month now and these are of increasing ferocity.  His people’s houses are not built to withstand such unprecedented conditions.  He expressed his thanks to SCCS and others for enabling him to come to Europe for the Paris conference – not that the politicians would be listening to his words! – and he thanked those present for waiting in the rain to hear him.  His personal pledge, he said, is for his 2 year-old son, that he will leave him a better world than his father and grandfather left him.  A fitting thought to end the day.