One week after the Climate change Paris agreement, looking back at the 196 Chairs Summit


by By Inès Bentolila, CIDSE

A few days after the end of the UN Climate Conference and the adoption of the Paris climate change Agreement, let’s look back at the 196 Chairs Summit. This peculiar meeting took place during the People’s Climate Summit / Village of Alternatives in Montreuil on Sunday 6 December.

“Do not go over the yellow line"… “The event will start soon, those who should sit on the chairs, come here!” … Jean Jaurès Square in Montreuil is gradually getting busy. 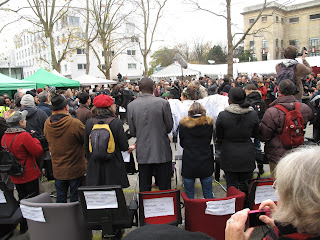 This event organized and conceived by the Basque organization BIZI! has a main goal: to mock the poor results expected by the negotiations which took place among the 196 States at COP21. For several months, activists took away nearly 200 chairs from different bank offices around the country and beyond such as Switzerland or Belgium. Until that day, well-known figures such as philosophers Edgard Morin and Patrick Viveret or the anti-globalization activist Susan George hid the chairs.

Chairs arrive one by one, each one carried by activists or representatives from countries most affected by climate change. Among them, we can spot Yeb Sano and Marcos Arruda. On the back of the seats is written the date and city when/where the chair has been stolen: Paris, Marseille, Nantes, Geneva, Bayonne, Nimes, Macon, Nancy etc.

Two women take the floor: Hindou Oumarou Ibrahim, coordinator of the Association for Indigenous Women and Peoples of Chad and Anabella Rosemberg from the International Trade Union Confederation. They pronounce an ambitious 5 points Program for climate justice:

The Summit ends with an International call for the civic requisition of chairs: a simple, non-violent and creative way to bring the issue of tax evasion and tax havens within the global public debate. The activist music band HK et les Saltimbanks, concludes the event: everybody strike up the lyrics “sans haine, sans arme et sans violence” ("without hatred, without weapons and without violence"). From the booths around, the delicious smell of hot wine and pumpkin fries awakened the sense of 196 citizens fighting for climate justice.